TODO EL MUNDO DICE AHO is an international music festival that brings together different artistic disciplines that manifest a solid relationship and commitment with the conservation and preservation of Mother Earth, awakening a new consciousness and a connection with our ancestral wisdom.

This festival is an answer of the Universe to unite Earth and Sky, creating a tool for the sustainability of our humanity through Medicine Music, and other artistic manifestations of healing. Medicine Music is made with intention and its objective is to HEAL our relationship with nature, with our inner SELF and all our relations.

JOIN US ON OUR UPCOMING FESTIVAL

Our mission is to foster and support the creation of Medicine Music and to leave a legacy of Love in Humanity, through the exploration of sound, song, dance and other healing arts.

Our purpose is to inspire through LOVE.

Our commitment is with Mother Earth and all the beings that inhabit her.

Our legacy are songs from the heart that will last and make an impact over time. 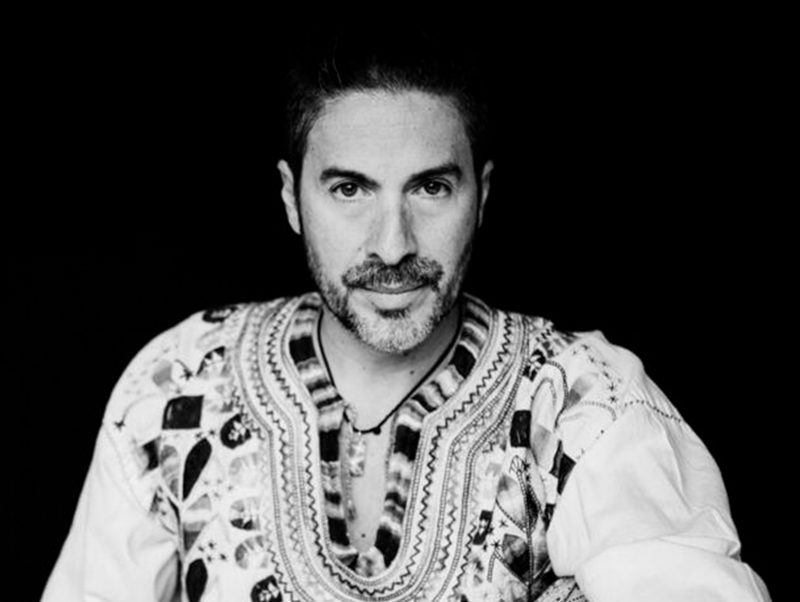 Singer-songwriter and producer of Medicine Music. Born in Venezuela, activist for the rights of our mother nature.

He has reached the hearts of many with his six albums: “Para ser un sol” (To be a Sun) Best New Artist for the 2013 Latin Grammy Award nominee, “Yo camino lo que canto” (I walk what I sing), “Sanando con Símbolos Reiki” (Healing with Reiki symbols), “Dúos” (Duets), “Diamante” (Diamond) “Cantos de mi padre” (Chants of my father).

Jesús collaborated with Sachamama.org (2015-2016), holding forums in relation to climate change in different cities in the US and México.

Organizer and co-founder of the International Festival of Medicine Music: “Todo El Mundo Dice Aho”, an initiative already in its tenth edition. An itinerant festival, which brings together different disciplines of art with a solid link and commitment to the care of our Mother Earth.

In 2013, he participated in the General Assembly of the United Nations in the celebration of Earth Day, in 2014 and 2016 he participated in the Medicine Music festival in the Sacred Valley – Peru, in (2016) he performed in “El Llamado de la Montaña” (The Call of the Mountain) in Putumayo – Colombia. In 2016, he also performed at “Raíces de la Tierra” (Roots of the Earth) at Tarapoto – Peru, Pachamama Fest – Mexico, “Luz y Armonía” (Light and Harmony) in Bogotá – Colombia, Chaski Fest in Cusco – Peru, Mexico City & Cabo San Lucas – Mexico and Grassrootsfest in Ithaca – USA.

He is founder and collaborator of Project Pachamama in the US, a non-profit foundation that benefits indigenous communities and social projects throughout Latin America.

Venezuelan singer-songwriter, dedicated to facilitating Ancestral Circular Dances, Sacred Circles, she is a Moon Dancer and an energy therapist.

Organizer and co-founder of the International Medicine Music Festival: “Todo El Mundo Dice Aho”, an initiative that is already in its tenth edition this 2023.

Teresa de Jesús is a guardian of Mother Earth, and all her love is manifested with her song and dances to activate memory through movement.

Her medicine is to connect the voice and movement with the Heart, entering states of peace and recognition of BEING, in harmony and gratitude and thus honor Mother Earth and all her elementals, to heal and awaken in all our sacred spaces.

Delfina Mun is an argentinian medicine woman, musician and visionary artist. Her art expresses healing, transformation and the great mystery of praying with the sacred plants of our Mother Earth. Since she was very young she has dedicated herself to the service and study of master plants, traditional indigenous ceremonies and sacred arts.

Delfina’s music brings together sacred chants from indigenous lineages of Abya Yala with her own medicine music compositions.

Her dedicated study of the ancestral voice is influenced by her southern roots and enhanced by her spiritual studies in the Amazon rainforest with the Yawanawa. 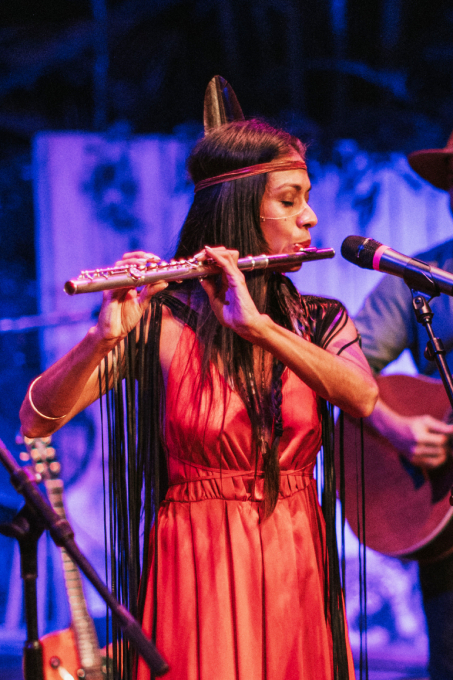 Flutist and vocalist Giselle World is a captivating performing & recording artist infusing ritual and indigenous culture into the electronic scene.

She is a classically trained musician and composer who has been journeying in the electronic music scene for over 10 years.

Through her travels and love of ceremony she’s created a soundscape of unique, conscious textures and fusion of tribal electronic medicine music whilst curating an alchemic experience honoring the elements and inspiring healing through powerful use of indigenous chants and ancient mantras.

She has been extensively in service to plant medicines, & advocates for indigenous rights, as well as sharing about indigenous wisdom and culture all over the world using music as a main tool by teaching about the cultures through workshops and song circles. 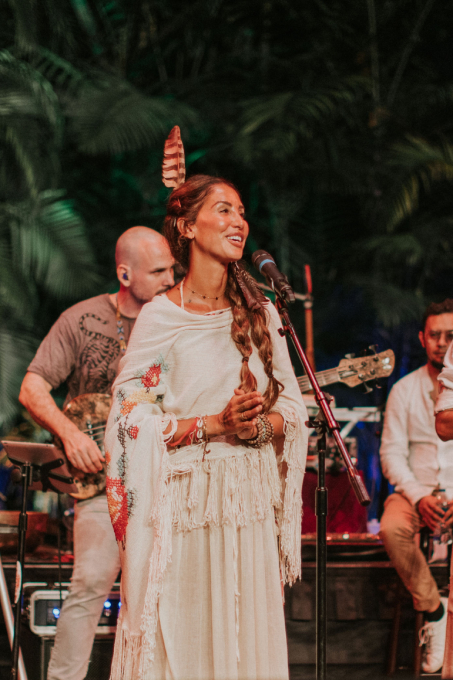 Gracia María is a woman of Prayer who dedicates her life to the service of Plant Spirits indigenous to her homeland Peru.

Whenever she’s not leading retreats across the world she is submerging herself into deepening her knowledge and connection through dietas with the indigenous tribes in the Amazonas.

As a loyal servant of the Great Mother, Gracia Maria acts as a bridge between spiritual and physical planes by applying ancient wisdom, weaving tradition and her own methods through her own expressions of the healing arts spreading seeds of freedom and awakening. 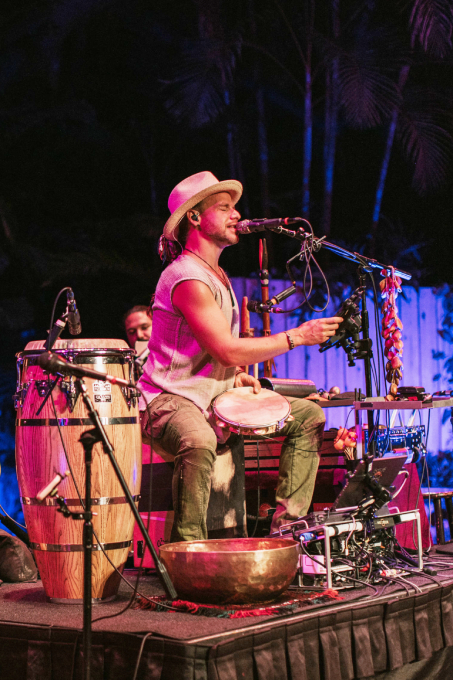 As a live looping artist and one-man orchestra Poranguí weaves ancestral songs and indigenous rhythms from around the globe. Creating his performances from scratch using looping technology, Poranguí’s live grooves range from meditative to dance party, moving the body, lifting the spirit, and transcending the divide between performer and audience.

Reared among the three cultures of Brazil, Mexico and the U.S., Poranguí was steeped in various traditional forms of music, healing and ceremony since birth. Drawing from his cross-cultural background and ethnomusicology training at Duke University, Poranguí has over twenty years of international work experience as an artist, musician, educator, filmmaker, consultant and therapist, utilizing the healing properties of sound and movement to foster our individual and collective well being. 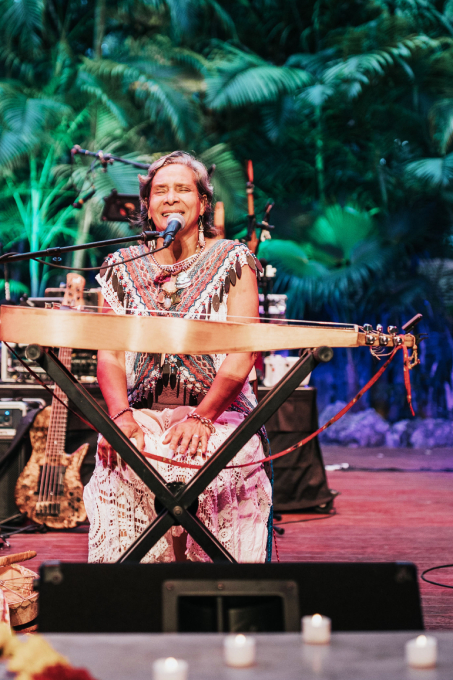 Pura Fé (Tuscarora/Taino) is an Indigenous activist, singer-songwriter, and storyteller known for her distinct, soulful vocals and for breathing life into several musical genres. Her work as a musician has brought her around the world to do work at festivals, benefits, in classrooms, online, and in the studio. As a Native activist and cultural leader, she has done work to combat the erasure of native culture, restore traditions, build community, fight corporate takeover of native land, and give a voice to those facing social injustice.

SOME OF OUR PAST EVENTS